Wal-Mart Global President and CEO Doug McMillon re-emphasized in Beijing on April 29 that he promised to invest in China for a long time and proposed plans to add 115 stores in the next three years. 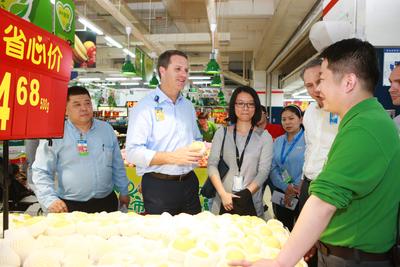 The picture shows Wal-Mart Global President and CEO Doug McMillon in the store to view the fruit area.

Dong Minglun stressed that Wal-Mart plans to add about 115 stores in China in 2015-2017, including hypermarkets and Sam's Club, which is expected to create more than 30,000 jobs. Sam's member store is also the focus of investment development, and will open seven new stores in China in the next 2-3 years.

In addition, Wal-Mart has invested 600 million yuan to upgrade more than 90 stores. The completed store has a significant improvement in the overall image of the store, customer service level, product category, sales performance and other aspects before the transformation. Thanks to the new energy-saving facilities such as LED lighting, the electricity consumption and energy consumption of the stores are greatly reduced, and they are more economical and environmentally friendly. In the future, Wal-Mart will continue to upgrade existing stores to enhance shopping experience. It is estimated that more than 370 million yuan will be invested in 2015 for the renovation and upgrading of more than 50 stores.

Sean Clarke, President and CEO of Wal-Mart China, stressed that Wal-Mart is full of confidence in the Chinese market. At present, Wal-Mart has opened 412 stores in 165 cities across the country. Wal-Mart attaches great importance to the Chinese market. Since the appointment of Doug McMillon to Wal-Mart's global president and CEO, it has made three special visits to China within 15 months.