1. What is the manufacturing process of the LED chip?

The LED chip is mainly manufactured to manufacture an effective and reliable low-ohmic contact electrode, and can satisfy the minimum voltage drop between the contactable materials and the pressure pad for providing the bonding wire while emitting as much light as possible. The film-passing process generally uses a vacuum evaporation method, which is mainly used to melt the material by resistance heating or electron beam bombardment heating under the high vacuum of 1.33 & TImes; 10? 4 Pa, and becomes metal vapor deposited on the surface of the semiconductor material under low pressure. . Generally, the P-type contact metal used includes an alloy such as AuBe and AuZn, and the contact metal on the N-side is usually an AuGeNi alloy. The alloy layer formed after coating also needs to expose the light-emitting area as much as possible by photolithography, so that the remaining alloy layer can meet the requirements of an effective and reliable low-ohmic contact electrode and wire bond pad. After the photolithography process is completed, the alloying process is also carried out, and the alloying is usually carried out under the protection of H2 or N2. The time and temperature of alloying are usually determined by factors such as the characteristics of the semiconductor material and the form of the alloy furnace. Of course, if the chip electrode process such as blue-green is complicated, it is necessary to increase the passivation film growth and the plasma etching process. 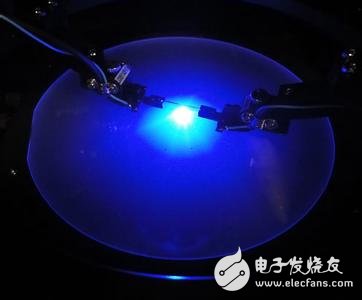 2. Which processes in the LED chip manufacturing process have a significant impact on their optoelectronic performance?

Generally speaking, after the LED epitaxial production is completed, her main electrical properties have been finalized, and the chip manufacturing does not change its nuclear nature. However, improper conditions in the coating and alloying process may cause some electrical parameters to be poor. For example, low or high alloying temperature will cause ohmic contact failure, and ohmic contact failure is the main cause of high forward voltage drop VF in chip manufacturing. After cutting, if some etching process is performed on the edge of the chip, it will be helpful to improve the reverse leakage of the chip. This is because after cutting with a diamond wheel blade, there will be more debris powder on the edge of the chip. If these stick to the PN junction of the LED chip, it will cause leakage and even breakdown. In addition, if the surface of the chip is not cleanly stripped, it will cause the front wire to be difficult to solder and solder. If it is the back side, it will also cause a high pressure drop. In the production process of the chip, the light intensity can be improved by roughening the surface and forming an inverted trapezoidal structure.

3. Why are LED chips divided into different sizes such as 8mil, 9mil, ..., 13âˆ½22mil, 40mil? What is the impact of size on LED optoelectronic performance?

LED chip size can be divided into small power chips, medium power chips and high power chips according to power. According to customer requirements, it can be divided into single tube level, digital level, dot matrix level and decorative lighting. As for the specific size of the chip is determined by the actual production level of different chip manufacturers, there is no specific requirement. As long as the process passes, the chip can increase unit output and reduce costs, and the photoelectric performance will not change fundamentally. The current used by the chip is actually related to the current density flowing through the chip. The chip uses a small current, and the chip uses a large current. Their unit current density is basically the same. If the current of the 10 mil chip is 20 mA, then the 40 mil chip can theoretically increase the current by 16 times, or 320 mA. However, considering that heat dissipation is a major problem at high currents, its luminous efficiency is lower than that of small currents. On the other hand, since the area is increased, the body resistance of the chip is lowered, so the forward conduction voltage is lowered.

LED high-power chips for white light are generally seen in the market at around 40 mils. The so-called power consumption of high-power chips generally means that the electric power is above 1 W. Since the quantum efficiency is generally less than 20%, most of the electrical energy is converted into thermal energy, so the heat dissipation of the high-power chip is very important, requiring a large area of â€‹â€‹the chip.

5. What are the different requirements for chip technology and processing equipment for manufacturing GaN epitaxial materials compared to GaP, GaAs, and InGaAlP? why?

Conventional LED red-yellow chips and high-bright quaternary red-yellow chips use compound semiconductor materials such as GaP and GaAs, and generally can be made into N-type substrates. Photolithography was carried out by a wet process, and finally a chip was cut with a diamond wheel blade. The blue-green chip of GaN material is a sapphire substrate. Since the sapphire substrate is insulated, it cannot be used as one pole of the LED. It is necessary to simultaneously fabricate two P/N electrodes on the epitaxial surface by a dry etching process. Also pass some passivation process. Since the sapphire is very hard, it is difficult to form a chip with a diamond wheel blade. Its process is generally more complex than the LEDs of GaP and GaAs materials.

6. What is the structure of the "transparent electrode" chip and what are its characteristics?

The so-called transparent electrode is to be able to conduct electricity, and the second is to be able to transmit light. This material is now most widely used in liquid crystal production processes. Its name is indium tin oxide, which is abbreviated as ITO, but it cannot be used as a solder pad. When making, first make an ohmic electrode on the surface of the chip, then cover the surface with a layer of ITO and then apply a pad on the surface of the ITO. The current from the lead is evenly distributed to the respective ohmic contact electrodes through the ITO layer, and the ITO can increase the light exit angle due to the refractive index between the air and the refractive index of the epitaxial material, and the luminous flux can also be increased.

7. What is the mainstream of chip technology for semiconductor lighting?

With the development of semiconductor LED technology, its application in the field of lighting is also increasing, especially the emergence of white LED, which has become a hot spot of semiconductor lighting. However, the key chip and packaging technologies still need to be improved, and the chip should be developed in terms of high power, high luminous efficiency and reduced thermal resistance. Increasing the power means that the current of the chip is increased. The most direct way is to increase the chip size. Nowadays, the high-power chips that are commonly used are all in 1mm & TImes; about 1mm, and the current is 350mA. Due to the increased current, the heat dissipation problem becomes To highlight the problem, the problem has been basically solved by the chip flip method. With the development of LED technology, its application in the field of lighting will face an unprecedented opportunity and challenge.

8. What is a "Flip Chip"? How is its structure? What are the advantages?

Blue LEDs usually use Al2O3 substrate. Al2O3 substrate has high hardness, low thermal conductivity and low conductivity. If the structure is used, it will bring anti-static problems. On the other hand, heat dissipation will become a high current. The main problem. At the same time, since the front electrode is facing upward, a part of the light is blocked, and the luminous efficiency is lowered. High-power blue LEDs can achieve more efficient light output than traditional packaging technology through chip flip-chip technology.